Many Faces Of Autism 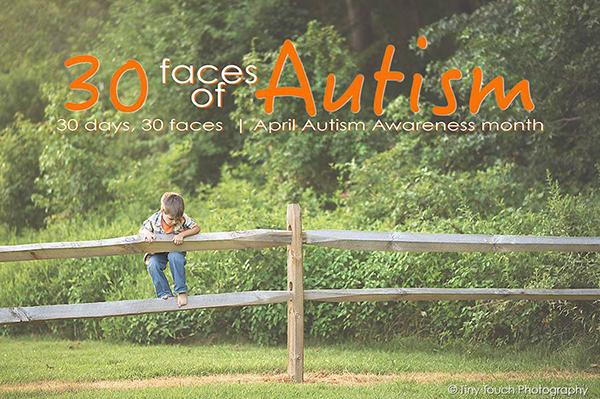 The Many Faces Of Autism

Since photographer Angela McLaughlin's 5-year-old son, Caleb, was diagnosed with autism a year ago, the mom of four says she's been surprised by the misconceptions and confusion about autism she has encountered.

"Caleb is our youngest of four children and is the inspiration behind ’30 faces of autism,'" McLaughlin wrote on her blog. "My goal with this project is to help spread awareness to not only autism, but to the amazing parents and supporters to children with autism." (from an article on Today.com) "I can't tell you how many people have said to me, 'He doesn't look like he has autism,' or, "He makes eye contact. He can't have autism," McLaughlin told TODAY Parents. "I just want people to understand."

"Erin loves to surf and is a fast runner," McLaughlin wrote on her blog. "In the spring she runs track for the Special Olympics, her favorite event is the hurdles. Over the last few years she has been the only female hurdler competing in Maryland for the Special Olympics." "Each feature will have images of the child that I've captured, and personal information about each child — what they like, what don't they like, what their struggles are, and what their achievements have been," said McLaughlin, who lives in Maryland. "The first paragraph of each spotlight will address a common autism misconception, elaborate on some common autism facts, or sometimes just make something about autism known to those who aren't personally affected."

"Jonathan’s favorite things to do are sing, play on his iPad, jump on the trampoline with his sister and parents, and watch Sesame Street," McLaughlin wrote in a blog post. "There isn’t much he dislikes, and one of his only weaknesses is loving and trusting too much."

Among the first five children featured on McLaughlin's blog was Julia Schad's son, Peter. Schad says her son has taught her a great deal about perseverance, determination and acceptance, and that when she heard about the opportunity to have him included in the project, she was eager to get involved. "Peter is 12 years old and is very happy, bright, friendly and loving. He was diagnosed with autism when he was 3 years old," McLaughing wrote in a blog post. "He draws people in and brings the best out of everyone." "Just as you and I are unique, so is every child with autism. Autism casts such a wide net from very high functioning Asperger's to very low functioning," said Schad. "My hope with this project is that children with autism are seen simply as children; all special and all unique. We need to be tolerant and accepting as well as be tolerated and accepted."

"Caroline is 10 years old and in 5th grade," McLaughlin wrote on her blog. "She is a very deep thinker, very creative and musically gifted. She loves to draw and build, her imagination is endless."

The mission of a project that shows the many faces of Autism is to show the world how amazing these kids are no matter where they are on the spectrum and that they look just like everyone else.  It is also to show children on the spectrum that they are not alone. They struggle with elements of their life, and might feel isolated and think that no one gets them. Everyone with Autism is unique and should be treated as such.

If you have a child that struggles with Autism, please contact us so we can help!