Painter with Autism Channels his Personal Experience of Color 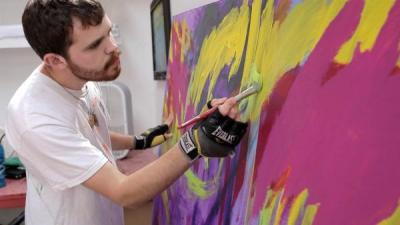 "Autism … offers a chance for us to glimpse an awe-filled vision of the world that might otherwise pass us by." — Dr. Colin Zimbleman, from the-art-of-autism.com.

Some Of The Following Information From NBCNews.com

Jeremy Sicile-Kira sees the world in vibrant colors: alluring oranges and yellows, calming purples and blues and soothing greens. And for the first time, the autistic artist is sharing that vision with the rest of us. "Color is evident in everything to me," says Jeremy, 27, whose form of autism spectrum disorder (ASD) includes the symptom of "grapheme-color synesthesia," a neurological phenomenon that causes him to perceive letters, words and even emotions in colors.

"Autism affects each person differently," Jeremy told NBC News. "For me it means being stuck in a body that doesn't work well and not being able to speak. It means also frankly being overwhelmed by sound and light." Jeremy has managed to turn that aggressive assault on his senses into art - a series of abstract portraits in which he portrays people through the colors that their faces, names and personalities create for him.

This month — Autism Awareness Month — Jeremy's work received its first public exposure at an art show in San Diego. The use of art to help people with autism express themselves has gained momentum in recent years and has produced some notable success stories. Self-taught autistic artist Jessy Park, for example, was recognized with an honorary doctorate of fine arts from Massachusetts College of Liberal Arts in 2003 for her pop art architectural paintings, and Susan Brown, who was diagnosed with autism as a child, has received considerable acclaim for her paintings and sculptures.

Temple Grandin, a professor of animal science at Colorado State University whose triumph over autism was the subject of the award-winning 2010 biopic "Temple Grandin," says art helped lead her to "a very interesting career." "Art skills became the basis of my career designing (humane) livestock facilities," the author of "Thinking in Pictures: My Life with Autism" told NBC News this week. "I encourage all parents to take the skills a child is good at and develop them. Kids with autism have uneven skills. They are good at one subject and bad at another. Areas of skill are often art, math or music." Art also can have therapeutic benefits, including promoting mental and emotional growth, proponents say.

Dr. Donna Betts, who specializes in art therapy, said that people with communicative disabilities can often use colors, shapes, and textures, to express emotions that may otherwise be difficult for them to convey verbally or physically. "Not only does the art media provide the client with a way to express themselves … but the (process) augments the communication process with body language," she said. For Jeremy, whose form of autism prevents him from verbally communicating without use of a "letter board" on which can spell out words by pointing or a specially outfitted iPad that vocalizes his keystrokes, the desire to express himself through art first emerged three years ago. His mother, Chantal Sicile-Kira, said her son had a dream in which one of his care workers appeared to him in colors. 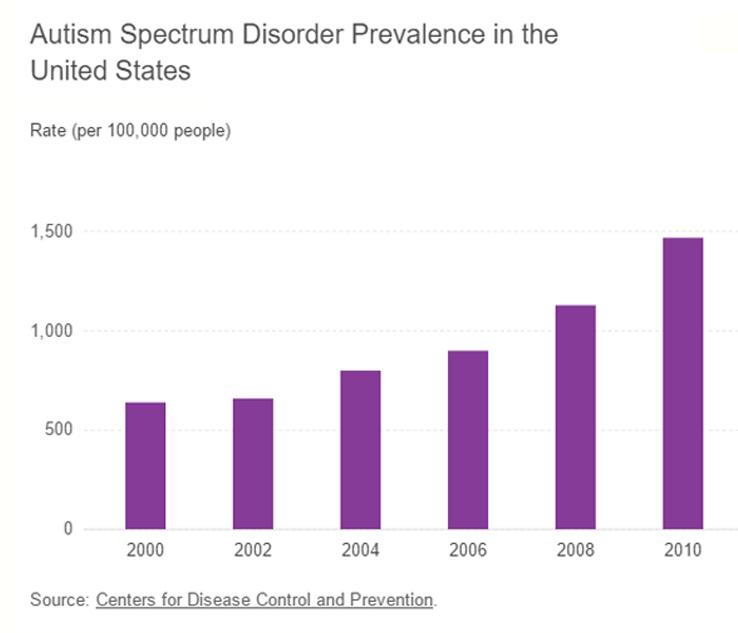 "She was bright and yellow - like the sun," she recalls him telling her. That dream and others like it led his doctors and family to the realization that Jeremy's autism included synesthesia, "which means that the part of my brain that controls the senses - sight, hearing, touch, smell and taste - (is) wired differently," he told NBC News via his iPad. Though Jeremy had never picked up a paintbrush before, Chantal encouraged him to start painting the colors and images that he was seeing in his dreams. That led to his new avocation converting his perceptions of personalities and emotions into portraits and, in the process, opening a new communication channel with the rest of the world. Jeremy's clients describe his paintings as "intuitive" and "incredibly accurate," even though they don't capture their physical likenesses. Instead, their portraits consist of intersecting lines and splashes of color that convey how Jeremy perceives them.  "For my colors, there was yellow for happiness," said JameyLee Nuss, who helps Jeremy with community projects and was one of his first clients. "There was orange for fun; there was purple for leadership."

Chantal Sicile-Kira remembers a conversation with Jeremy a few years ago. "Mom - I had a dream that I had my own art show. Could this dream come true?" she remembers him asking. That dream came true this month with a solo exhibition of his portraits titled "Inner Dimensions" at San Diego's Space4Art gallery, which ran through Saturday. Jeremy told NBC News that he hopes viewers come away with a better understanding of his condition. "I see color in all specks of dust, and in the specks of dots that make up the letters in names," he said. "Every name has a beautiful color."